It’s been seven years since Australian blues singer/songwriter/guitarist Owen Campbell was last in Nashville. Back then he wasn’t a finalist on Australia’s Got Talent and he didn’t a number #1 blues album in Australia. No last time Campbell was in Nashville was living under the 2nd avenue bridge busking and partying on Broadway Street. Campbell has come a long way from his busking days, but Monday night’s show at The High Watt showed he hasn’t strayed too far from his roots–it was just him, with a couple guitars and stomp-box to keep rhythm. 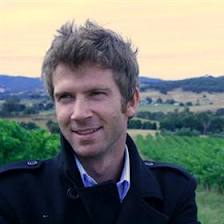 If you’re unfamiliar Campbell (I wrote about Pilgrim here), his guitar style is somewhat unique. When playing acoustically, he often plays lap steel, with his guitar on his lap, strings facing the ceiling while placing his slide hand across the fretboard. Companies make guitars and slides specifically for lap steel, but Campbell opts instead for a regular bottleneck slide and traditional dreadnought acoustic. Still, the result is stunning as Campbell nods to past slide legends like Mississippi John Hurt and Son House while adding his own more contemporary licks.

Campbell started his set with with “Nashville High Roller” a delta blues from his 2012 release Sunshine Road that featured his slide guitar chops and showcased his uncanny ability to fill the room with stunning simultaneous rhythm and lead playing.

Next, Campbell launched into “Remember to Breath,” a blues/rock cut from his most recent album The Pilgrim was perfectly suited for Campbell’s gritty, half-shouted vocals. Often times modern blues singers attempt unsuccessfully to emulate the gravely vocals of past blues singers, but Campbell’s gruff tone sounded honest and hard-earned.
For “Wrecking Ball.” “On My Knees” and a few others, Campbell switched to electric guitar, but after his hearing his acoustic slide work, his electric songs were less effective. He didn’t use a slide and his tone was snarling, distorted and at times overbearing. Some of his tone problems can can attributed to a cheap amp he was forced to use due difficulties with usual equipment, but maybe it would have been better to stick with his acoustic.

One of the show’s highlights was an instrumental called “Bukhu’s Blues Mongolian Instrumental.” Again it featured Campbell on lap slide, but in place of blues licks were droning low notes coupled with flourishes of high eastern semi-tone scale licks that emulated a sitar. It was effective and a nice departure from his usual blues style.

Campbell’s set was brief–only about 45 minutes–but it was enough time for him to showcase his immense talents as a guitarist, and prove why this time around he’s headlining at the High Watt and not busking on Broadway Ave.

One Response to “Show review: Owen Campbell @ The High Watt”