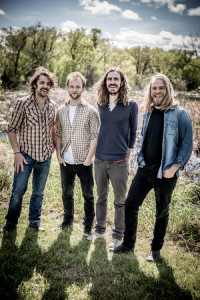 If you’re into The Wild Feathers, The Eagles, and Little Feat, you’ll want to check out the Canadian group The Bros. Landreth. As the name implies, the group is comprised of brothers Joey and David (guitar and bass respectively), and is rounded out by Ryan Voth on Drums and Alex Campbell on keys and harmonica.

The band recently signed to Saddle Creek Records (Brandy Clark, Pistol Annies) and while they aren’t releasing their debut Let it Lie in the states until September, their Youtube videos are full of tasty slide guitar, smooth  laural canyon harmonies and well written alt-country tunes.

Although the band’s tune “Tappin’ on the Glass” is featured on their Bandcamp page and website, I really liked “Angelina” — a slow burning tune that alternates between from a minor verse, to a double time chorus. It’s got some nice harmonies and a great George Harrisonesqe slide solo.

One Response to “Discovery: The Bros. Landreth”