Review: Nikki Lane — All or Nothin’ 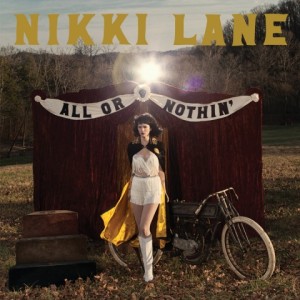 Nikki Lane, like her music is somewhat hard to pin down. Originally from Greenville, South Carolina, Lane has made stops in L.A., and New York, before settling (for now) in East Nashville and releasing her debut Walk of Shame in 2011.  All or Nothin’ sees Lane teaming up with Black Key member turned prolific producer Dan Auerbach for an album that leans heavily on traditional country sounds, while calling strongly on elements of Motown, surf, and 60’s rock.

One of All or Nothin’s greatest strengths is its unified feel, and despite a having diverse set of songs ranging from straight country ballads, (“Good Man”) to surf rock, (“I Don’t Care”) to 70’s california Eaglesque country/rock (“Love’s on Fire”), the production is consistent from tune to tune with slinky pedal steel licks often acting as the glue holding it all together. The result is an album that sounds more polished and fully realized than Lane’s previous work.

In shaping the album’s feel and vibe, Auerbach’s chooses to stick with his strength — creating a warm vintage environment full of tones from past eras. In most respects his approach works and the album has a sexy built-in layer of dirt and smoke that sounds immediately like a 30-old record playing through tired speakers. Very cool, but sometimes the mixes seem too hazy, and the various reverbs can make some tunes like “Seein’ Double” (still my favorite track) and “Want My Heart Back” sound distant and even flat. Same goes with Lane’s vocals which are at times nestled so deeply in the mix that they lose their cut and intensity. However, the the grooves on “All or Nothin’” and “Sleep with a Stranger” are clear, killer, and right in both Lane and Auerbach’s wheelhouse.

Lane’s delivery on All or Nothin’ marks a departure from her more aggressive fiery takes on Walk of Shame. At times she almost sounds disinterested (“Out of My Mind”) with her lines, while at others, her relaxed approach gives her smokey southern drawl just the right weary ache.

As a songwriter, Lane wrote or co-wrote every song on the record. Her style is honest, confessional, and at times blunt–similar in some respects to Lydia Loveless, Caitlyn Rose and even Kacy Musgrages. As such, her songwriting has earned her a “Outlaw Country” label. It’s fitting in a traditional sense, but it’s 2014 and the themes that Lane sings about really shouldn’t be (and I don’t think are meant to be) shocking.

For example, “Sleep with a Stranger” is exactly what it sounds like, a funky, unapologetic plea for a one night stand. The tune’s honesty is refreshing and Lane sings it convincingly. Drugs references are also sprinkled though out several songs, but they aren’t a focal point and act instead as passing snapshots into Lane’s life.

On “Man Up,” and “Good Man,” Lane sings about dealing with dead beat loser boyfriends/husbands, and on the “The Right Time” Lane sings “Any day or nighttime it’s always the right time, it’s always the right time to do the wrong thing.” It’s safe to say that Lane may not have everything figured out and the songs on All or Nothin’ often reside in dark shadowy places. But there’s still fun to be had on All or Nothin’ – just not the most honest variety.

All or Nothin’ is great slow-burner that showcases Lane’s development both as an artist and songwriter with the help of Auerbach’s guiding hand. Sure, she’s still trying to figure herself out but that process is certainly worth a few listens.