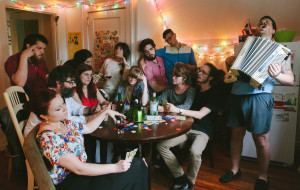 The Collection, a Greensboro N.C. folk group, released the first single “Capernaum” from their upcoming album Ars Moriendi. The group, headed by David Wimbish, is really more of a rotating door of various musicians ranging from 13-18 members who play a variety of instruments from guitar and drums to phin (apparently an ethnic Laotian lute) and didgerdoo.

“Capernaum,” while at its roots a folk tune, is dominated by beautiful orchestral lines that are more commonly associated with orchestral music.  While it’s not uncommon to use strings on a folk tune to give an arrangement some meat, on “Capernaum” they’re the centerpiece, and guide the songs dynamic shifts with various melodies ranging from subdued and delicate to crashing, cascading chromatic bursts. Here’s what Wimbish said about writing “Capernaum:”

“Right after I was given news my friend had committed suicide, I was having trouble just dealing. Everything seemed covered in death, and I had to get away, so I drove to the beach with twenty instruments and my computer in my car. I pulled out my guitar and just started singing about all the confusion I felt, and I quickly had the words and violin melody for Capernaum. Every time it started to feel beautiful, I threw it back off a cliff of chromatic scales, wrecked it on the rocks below. The song came quickly – I wrote, arranged, and demo-ed it in about 5 hours. Sometimes you just feel something so strongly, it’s dying to find a way out of you; it needs to find a way to breathe.”

If you like “Capernaum,” Ars Moriendi is set for a July 15 release, and be sure to check the band’s site for upcoming tour dates in support of the new LP.