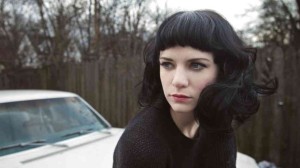 As the Nashville based singer/songwriter Nikki Lane told Elle.com, “I want to be the queen of country music,” but based on the bro-centric, decidedly southern viewpoint of country music today, that may be difficult feat.

But that’s not a problem since since Lane’s construction of country music,  is much broader and more eclectic than popular country, and includes strong elements of western spaghetti,  and desert rock, along with lyrical themes (one night stands, shady characters, drugs, you know, themes that have been sung about in other genres for decades) that could easily be thrown in the bizarre “outlaw country” world.

“Seein’ Double” is a track off Lane’s upcoming Dan Auerback (Black Keys member) produced album All or Nothin’ that’s set to be released May 6. The tune features the sure signs of Auerback’s  involvement (in a good viby way), as the tune’s rollicking, yet dark  instrumental track features vintage reverb laden guitars, organs, and a slightly improvised, live, yet still fully realized feel. The chords and and especially the guitar solo at the track’s end nod to more western influences than southern, and take the tune into a darker, hazier atmosphere.  Lane’s vocals have a smoky, southern smolder while retaining enough fire and intensity to match the almost galloping beat of “Seein’ Double.”

Lyrically, Lane had this to say about writing the tune. “It was me getting really faded to forget that I wasn’t in a very happy place at the momoent. It was a dark place and I wanted to represent that.”

If you dig “Seein’ Double” but don’t want to wait until May 6th to hear all of All or Nothin’ head over to NPR to stream the entire album now. Unfortunately Lane’s management won’t allow a soundcloud widget, but here’s a link to the tune: