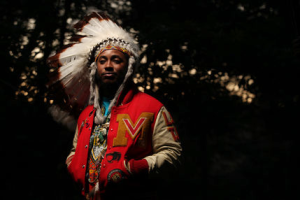 Hearbreaks + Setsbacks is the first single from Thundercat’s upcoming July 9 release, Apocalypse. Thundercat AKA Stephan Bruner has made a name for himself in L.A. as an in-demand  bassist, and has collaborated with Snoop, Erykah Badu, Stanley Clarke and Flying Lotus (who produced Thundercat’s solo debut The Golden Age of Apocalypse.) ‘Heatbreaks + Setsbacks’ again pairs Bruner with Flying Lotus who co-wrote/produced the song along with Mono/Poly.

The track’s foundation consists of spacey analog synths and an almost off-kilter drum beat. The arrangement is dense, and at first almost seems like various instruments are fighting for space, but after a few listens, the arrangement’s concept falls into place and it becomes clear that everything is in its rightful place. Bruner’s Bass work is perfect–alternating between single notes and his signature brand of chord voicing–and never dominates the arrangement.

Vocally, Bruner’s voice is like soul butter, nodding back to 70′s singers like Bill Withers and Marvin Gaye and more recently Cody ChestnuTT. Although he’s known primarily as a bassist, his vocals are what will ultimately allow him jump from sideman to successful solo artist, and if the rest of the upcoming album’s vocals are as strong as on ‘Heartbreaks,’ Bruner’s got what it takes.

‘Heartbreaks + Setbacks’ is great modern take on classic 70′s soul, and if this track is any indication of what the rest of Apocalypse will sound like, then July 9 is going to be a pretty good day in music.